Gays Against Guns NY is an inclusive group of LGBTQ people and their allies committed to nonviolently fighting the forces enabling gun violence in the U.S. on the local, state and national level.

We are New York-based but work with GAG chapters in other cities to ensure safety for all individuals, particularly vulnerable communities such as people of color, LGBTQ people, religious minorities and their significant overlap.

We are committed to sustaining public attention and anger on the dangerous and outsize influence of the gun lobby. We strongly believe that bigotry and hate plus easy access to lethal weapons is a deadly combination for such groups.

We demand sensible and meaningful gun reform, such as a reinstatement of a ban on assault weapons and high-capacity magazines, universal background checks on ALL gun sales and no-buy lists with constitutional protections built in so that people of color, Muslims and activists are not discriminated against.

Finally, We hold accountable all corporate entities and puppet politicians who prioritize gun sales and access over public safety and their constituents' lives. We will not rest until our LGBTQ family and the public at large are safe from gun violence.

HOW AND WHY DID GAG FORM?

GAG was formed several days after the Orlando massacre of 49 LGBTQ+ lives on June 12th, 2016. Several friends came together and formed a space (Gays Against Guns) for members of the community to turn heartache, anger, and outrage into action- complacency was no longer an option.

Orlando threw into relief for us the responsibility we have to both our immediate LGBTQ family and to our allies and so we go to work.

Our entry into the long-standing Gun Violence Protection movement happened on June 26th, at Pride, where 750+ people marched with GAG and The Human Beings. Since then we have been going strong. There are currently GAG chapters in NJ,LA, DC, Orlando, Boston, and Ptown.

GAG Debuts at the 2016 Pride March

WHERE DO WE MEET?

Sometimes we march in parades (Gay Pride, Halloween). Sometimes we rent buses to go to Washington or New Hampshire or Long Island, to torment the NRA or some NRA puppet legislator.

Most often we meet here in NYC to shame and blame a gun company investor (BlackRock) or an NRA discount giver (FedEx, Hertz, Wyndham). Lately we’ve joined the large protests against Trump. 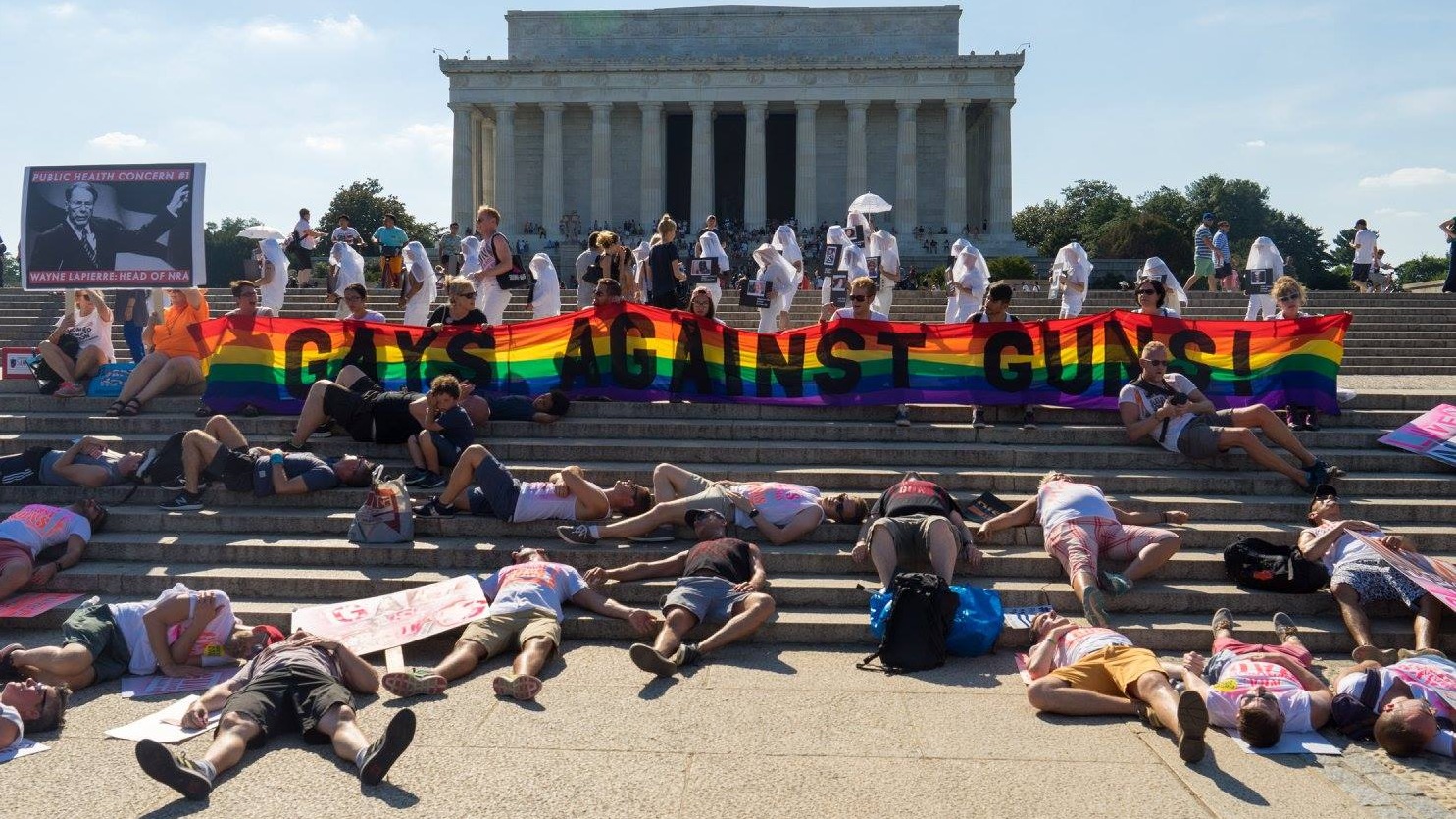 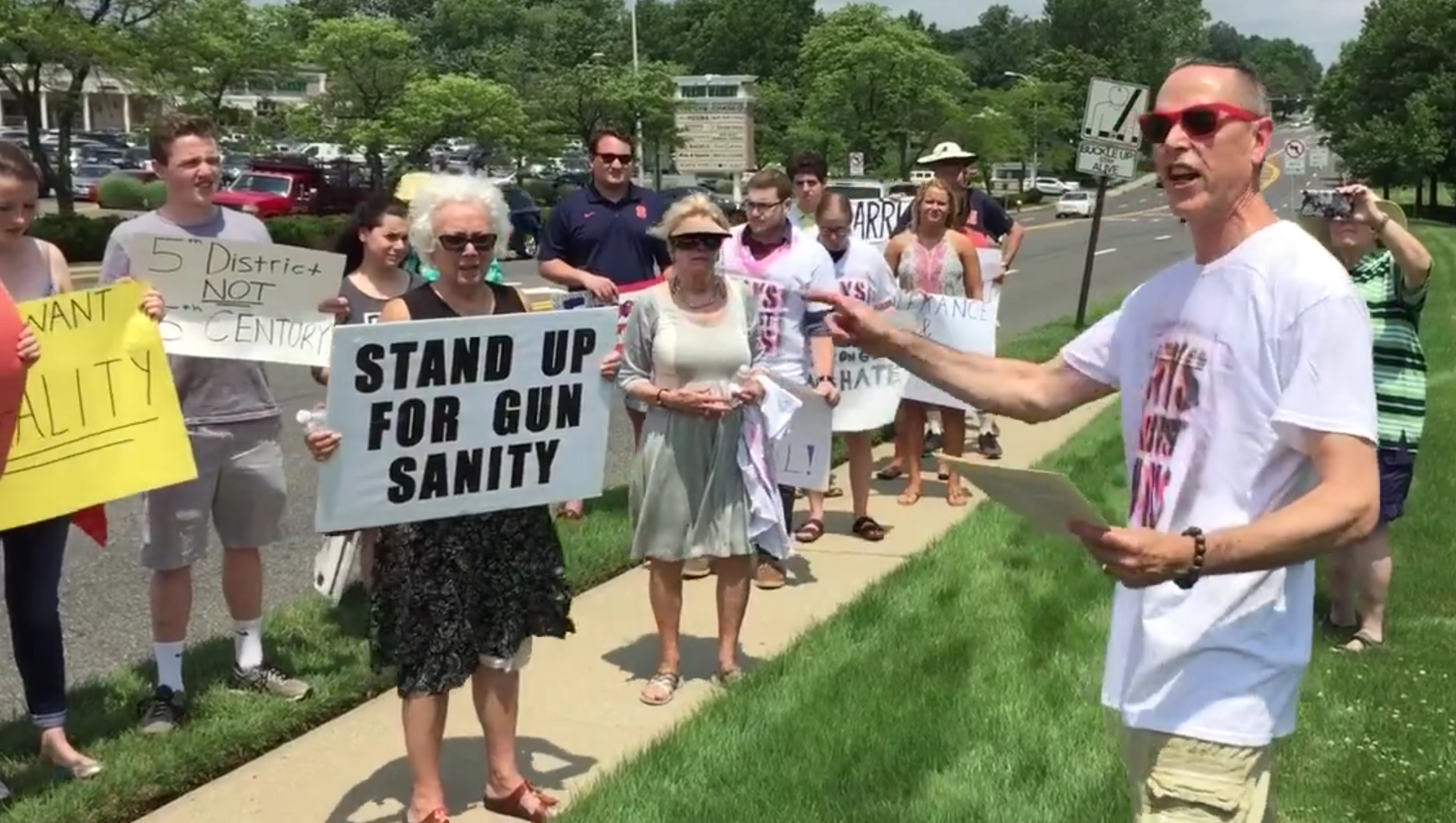 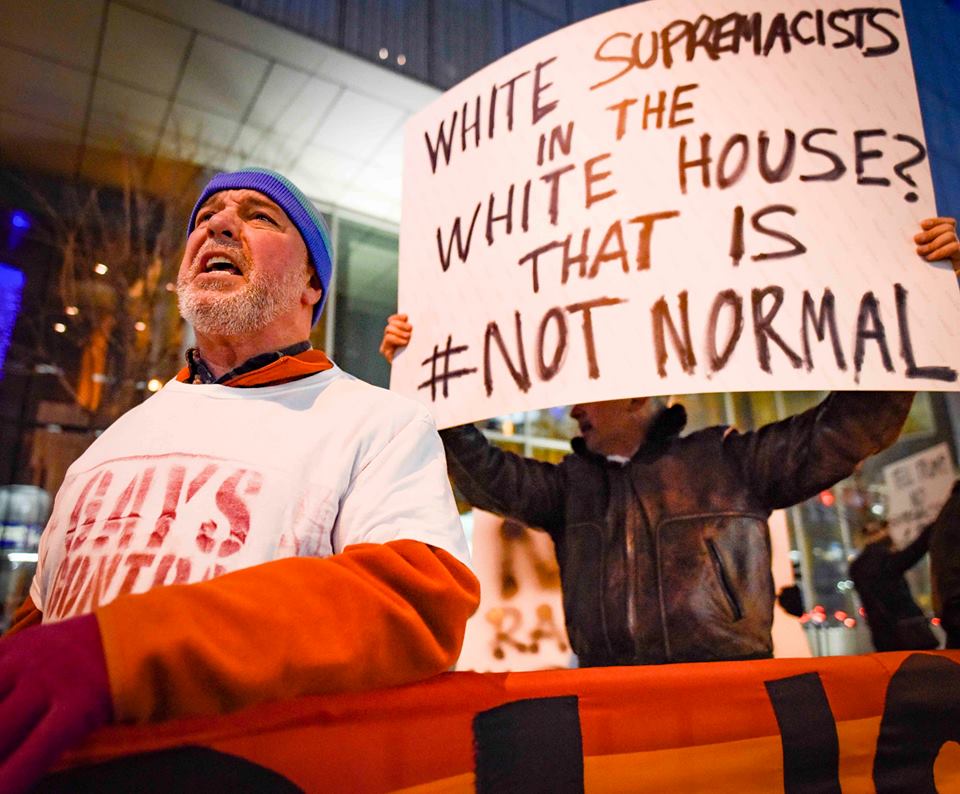 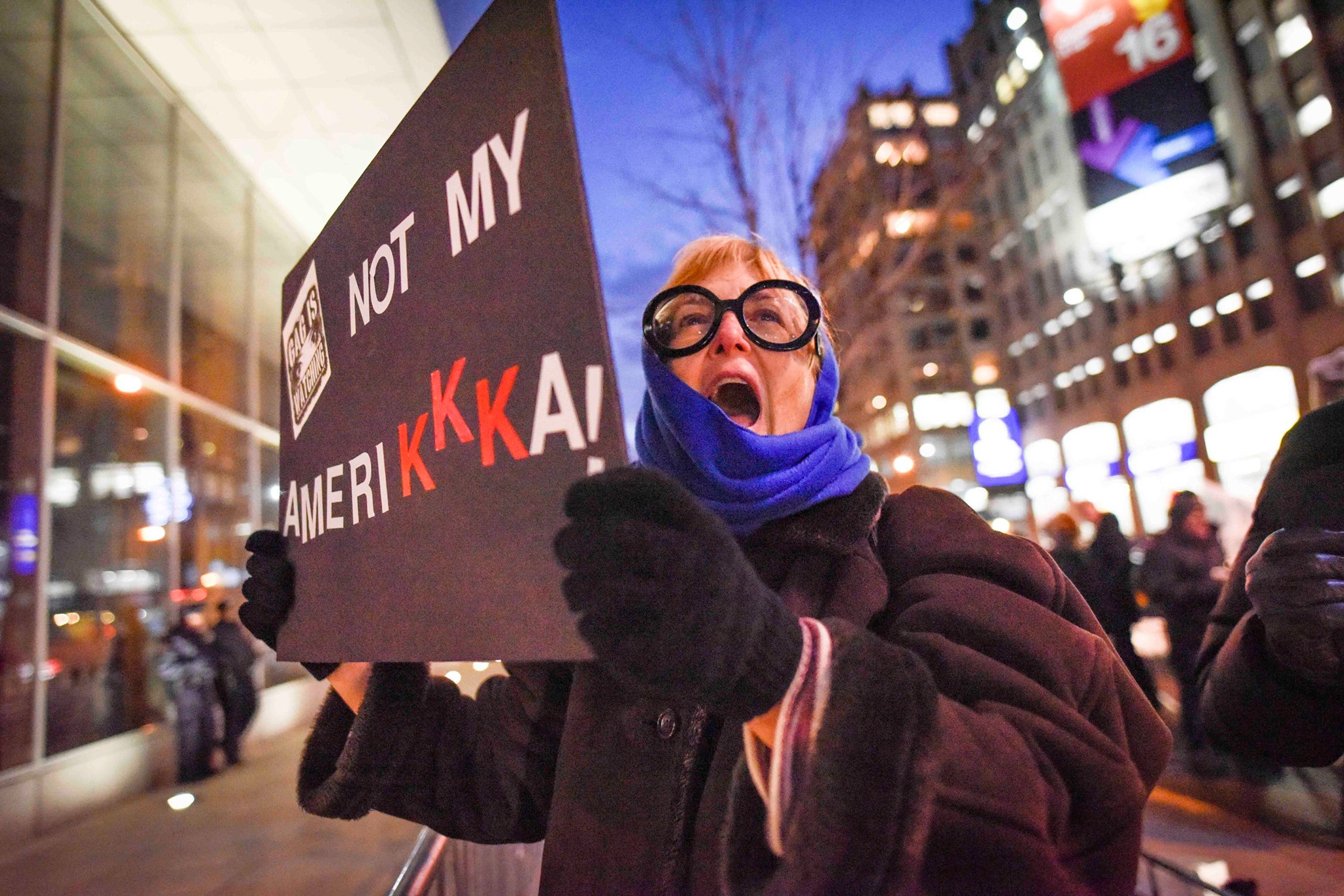 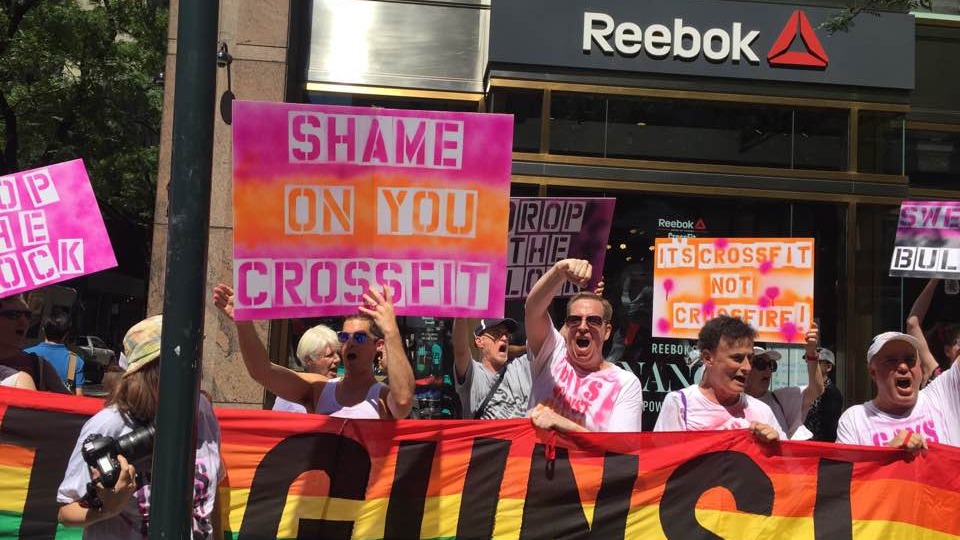 One contingent is Christmas caroling this month in Times Square and Rockefeller Center, to carry the gun control message to tourists and shoppers.

While the focus of GAG is to address gun violence, Trump’s electoral college win has resulted in a sustained Working Group, GAG IS WATCHING, to form. GAG IS WATCHING views itself as a plank of Trump Resistance and protests against hate and the threatening of Civil Rights for all.

WHAT HAPPENS AT OUR ACTIONS?

There’s a lot of marching and chanting, and we carry a shitload of amazing banners and signs (we’re arty). We generally have a lot of fun, and (because we’re so arty) we tend to get noticed by the press.

Our Human Beings usually make an appearance—silent, veiled, dressed all in white, they bring a somber, memorial energy to our actions. They’re not vague performance art—each one represents a particular victim of gun violence. Most of us have been a Human Being at least once—it’s very moving.

WILL I GET ARRESTED?

No! Well, probably not. So far, only one Gagger has been arrested (attention whore). Going into actions, we are very clear about how to avoid confrontations with the police.

Periodically we conduct civil disobedience trainings to help you prepare in the unlikely event it happens. (We also have a great legal team and a growing bail fund.) If you want to get arrested—that’s great, too. Going to jail for 4 or 8 or 24 hours is an amazing way to let the media know how we feel.

But please let us know your intentions ahead of time so we can plan for your safety and prompt release.

HOW DOES GAG OPERATE?

Newcomers are encouraged to work in a committee or share on the floor their ideas for actions. Our Thursday meetings start with an “in memoriam”—a brief tribute to someone who’s been killed by gun violence. Then each committee gives a brief spiel. We do recaps of actions we’ve just finished, and plan for upcoming events. Then a lot of us get Thai food or burgers.